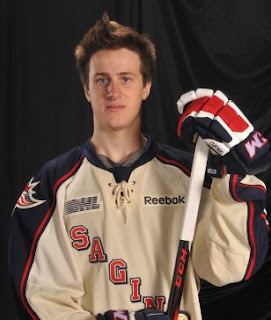 Anytime a team trades their best player, the assumption is made that said team is entering a rebuild. When the Saginaw Spirit traded their captain, Vincent Trocheck, to the Plymouth Whalers on January 10th, many figured that this symbolized the white towel being thrown for the 2012/2013 season. At the time they were a .500 hockey club, battling it out with the Windsor Spitfires for the 8th spot in the Western Conference. In a somewhat miraculous turn of events, the exodus of their captain has sparked the Spirit. 10-5 since the trade, Saginaw has distanced themselves from Windsor (11 points up). They’re playing incredible hockey and are putting themselves in a position to surprise people in the OHL playoffs. Saginaw still has the opportunity to move up as high as 5th in the Conference too. Many would agree; this was not the expected result following the trade.

So what, specifically, has sparked this team? A valid argument could be made that said spark has been the exceptional play of second year forward Jimmy Lodge. “It hurt to lose Trocheck, since he was probably our best player,” says Lodge. “But we needed guys to step up and score goals in his absence.” Lodge, the Pennsylvania native and former 3rd round draft pick of the Spirit, has certainly done that. In the 15 games since the big trade, Lodge has 26 points (11 goals, and 15 assists). He’s vaulted himself into contention for the top 20 in league scoring, and is second to only Max Domi (of the London Knights) in scoring among 1995 born players in the OHL. Considering Lodge started the season with only 2 goals and 2 assists in his first 10 games, this feat tells you how brilliantly he’s been performing of late.

Lodge is being modest when he’s quick to point out that he’s been a product of how well his line has been playing. I’m of course referring to one of the hottest lines in the entire CHL, consisting of Lodge, Eric Locke, and Garret Ross. “They’re fantastic players,” says Lodge. “We’re just really clicking right now. And that’s giving me more confidence to go out and play well.” I’d say that’s an understatement. In February alone (8 games), those three players have combined for a total of 26 goals. That’s more than the Erie Otters have scored as team this month (25).

It’s Lodge’s ability to see the ice and make those around him better that has helped to elevate the abilities of his line and his team, a trait which he considers his best asset as a player. Lodge’s size, speed and skill package allows him to be the perfect compliment to the tenacious Locke, and the feisty Ross. We should expect nothing less from a player who grew up idolizing Peter Forsberg in his time with the Philadelphia Flyers.

I think it’s certainly unfair to suggest that Lodge’s accomplishments this year were expected. However, nor are they surprising. With the losses of Brandon Saad, Josh Shalla, and Michael Fine, it was plainly obvious that the Spirit’s solid collection of young players (like Lodge, Justin Kea, and Nick Moutrey) would have to step up their game. Lodge came into the season given more responsibility and increased ice time after playing a bit role as a 16 year old. He also donned the Stars and Stripes for this summer’s Ivan Hlinka tournament, an event which brought together the top ’95 players in the world. Needless to say, the pedigree for success was there. However, Lodge does credit last year’s veteran squad with helping him learn to play at this level. “One of the biggest things that I took away from last year’s rookie season was just seeing guys like Saad and Trocheck. You know, watching them and learning about the game. Things like having proper work ethic, how to workout and how to eat,” says Lodge.

All things considered, there’s no question that the trade of Vincent Trocheck forced Lodge into a role he could have struggled with. It’s not an easy task to take on the offensive responsibilities of your former captain; a player many experts consider a candidate for the Red Tilson this season. Sink or swim; and Lodge swam. So why isn’t he getting more exposure for this year’s draft? Quite frankly, that’s a damn good question.

As mentioned, Lodge is currently the second highest scoring ’95 in the league; and the fourth highest draft eligible player (behind Domi, Kerby Rychel, and Sean Monahan). Yet, he doesn’t even crack TSN expert Craig Button’s latest Top 75 for the 2013 NHL Entry Draft. Lodge goes up against the opposition’s best every night (at least for the past two months) and he consistently comes out ahead. We’re looking at a 6’2 forward who skates well, can put the puck in the net and who makes others around him better. That’s the definition of a prospect I want come June 30th.

Vince Lombardi once said. “Leaders aren’t born, they are made. And they are made just like anything else, through hard work.” Whether he knows it or not, the trade of Vincent Trocheck forced Jimmy Lodge into a leadership role. But he was put into that role because he had earned it. Along with the likes of Garret Ross and Eric Locke, Lodge has put Saginaw on his back and delivered. Sooner or later, likely sometime soon, NHL scouts are going to realize; Jimmy Lodge has elevated Saginaw’s spirit.

I Want to thank Jimmy Lodge for taking the time to chat with me about his season and the draft. I also want to thank Spirit Director of Communications Leigh Cunningham for making this happen. Photo credit to the Saginaw Spirit hockey club.

Below you can find the transcript of Jimmy and I's conversation...

Brock Otten - Firstly, congrats on the strong season so far. What’s been the biggest difference for you since the start of the year? It seems like every month is better than the next (at least production wise).

Jimmy Lodge - I think one of the biggest things is the line I’ve been on with Ross and Locke. They’re fantastic players. We’re just really clicking right now. And that’s giving me more confidence to go out and play well.

Brock Otten - I hate to say it, but it’s almost like the absence of Vincent Trocheck has allowed you to grow a bit more…Would you agree at all with that statement?

Jimmy Lodge - Definitely. Losing Trocheck was huge. But we needed guys to step up and score goals in his absence. The trade gave me an opportunity to have a bigger role and gave me more ice time. But it hurts to lose Trocheck since he was probably our best player.

Brock Otten - I want to back track a bit to last year and the summer. When it was time to make a decision about what path to take (NCAA or OHL)…what made you choose the OHL?

Jimmy Lodge - Well I played my minor midget year in Toronto (with the Toronto Titans) so I got to see what the OHL was all about. And I sort of became fascinated with the OHL and how big it was. It seemed like the best league to play in. I thought more exposure because there seemed to be more NHL scouts going to watch. If I didn’t go the OHL route, I probably would have played my draft year in the USHL which I don’t think would have been as good.

Brock Otten - What was the biggest thing you took away from your rookie season?

Jimmy Lodge - I think just seeing guys like Saad and Trocheck. You know, watching them and learning about the game. Things like having proper work ethic. How to workout and how to eat. Also just getting used to the travel, and the number of games you play.

Brock Otten - You played for the U.S. at the Under 18 Ivan Hlinka tournament…What was that experience like?

Jimmy Lodge - Well we (as a team) didn’t do as well as we could have but it was still a really cool experience to see all the best players from my age group, especially the Euros. Playing the top guys from Europe was fun. I’m not sure if I played my best or not, I think I was just sort of an average player at the event, but it was still fun.

Brock Otten - Let’s talk about your game. If a scout asked you, what’s the one thing you need to improve on before reaching the next level, what would you say (other than the cliched, got to get stronger, faster, etc)?

Jimmy Lodge - I think they’d say something about being able to make the right choices on the ice. You know, offensively and defensively. Just not trying to do too much, especially with the puck. I think I’m definitely getting better at this, as I play more.

Brock Otten - Conversely, what if they asked you what your biggest strength is? What makes you such an effective player?

Jimmy Lodge - I’d say my playmaking ability. That aspect of finding guys in open areas and getting them the puck. I think I also finish off plays well too, when I get the chance.

Brock Otten - Do you think about the upcoming draft at all, or is it something you try to distance yourself from?

Jimmy Lodge - Not distance myself but I also try not to think about it too much. Just trying not to stress out or get distracted, you know? But it’s definitely always there in the back of your mind. Getting drafted in the first three rounds would definitely be a goal of mine though.

Brock Otten - Being a Philadelphia native, any secret hopes that the Flyers or Penguins call your name in June?

Jimmy Lodge - OH, that’d be nice! The Flyers were my favourite growing up. Peter Forsberg was one of my favourite players. But, really, any NHL team would be great.

Brock Otten - On a related note, is there a player you look at in the NHL and say, “man, that’s a guy I’d like to play like?” In other words, do you feel there is a comparison out there for you?

Jimmy Lodge - I don’t know really. I guess you could say Claude Giroux but I don’t know if I can compare myself to him. He’s such a good player and I just love watching him out there.

Brock Otten - That’s all Jimmy, thanks for the time and best of luck through the rest of the season and the draft!

Jimmy Lodge - Thanks so much for interviewing me. My pleasure.