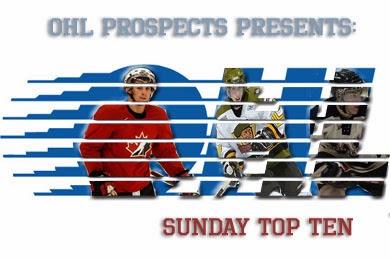 For those that have read the blog for a while, this is a yearly tradition. It's always a fun list to look back on after.

Three of the players on this list have already signed NHL contracts, but they're still included because it's meant to be a guide of the top OA free agents this season in the OHL.

Likely half of the players on this list will not end up getting a professional contract and will play in the CIS. It's the nature of the beast. The bottom line is that a few will and many will not and those players will take advantage of their education package while continuing to play a high level of hockey at a Canadian University.

Secondly, this list does not include overagers who have yet to sign NHL contracts, despite having their draft rights owned by a team (like Kurtis Gabriel). This list is for those players who are (or were) NHL free agents after going through the draft two or three times (depending on birth date).

10. Remy Giftopoulos - Windsor Spitfires
Giftopolous has gotten better each year he's played in the league, working himself up from 4th line energy guy, to top 6 scoring forward. He's a very versatile player who can find success in several different roles. If he's to go on to the pro ranks, he'll have to keep using his size offensively and continue to battle in front of the net and along the boards. He certainly has the potential to be a 4th line worker at the NHL level IMO.

9. Zach Hall - Barrie Colts
If only he was a bit bigger, he'd probably already be drafted. Hall is a dynamic offensive player and playmaker. He's gotten stronger over the years and has even added a bit of sandpaper to his game. He reminds me a lot of former Kitchener Ranger Jason Akeson, who did eventually get a contract (and even a taste in the NHL).

8. Franky Palazzese - Sudbury Wolves
Palazzese started the year kind of slowly (perhaps disappointed he had to return for an OA year?), but he's gotten better and better each month. He has the Wolves playing like contenders in the Eastern Conference. If he can take this team far in the playoffs, I think he'll have a great shot of getting a contract because he's an incredibly athletic goaltender who's often able to come up with a lot of saves for his hockey club.

7. Michael Moffat - Kingston Frontenacs
Definitely wouldn't have thought that I'd have him on a list like this a few years ago. But he's improved so much as an OHL player over the years. Moffat has gone from being a one dimensional offensive defender with questionable decision making skills, to a sturdy two-way defender. He sees the ice in all situations and has the size and skating ability to perform at a higher level.

6. Carter Sandlak - Plymouth Whalers
A pure sandpaper kind of guy. Sandlak is a very solid two-way player who is always battling for position on the ice. He often attacks the net hard and is quick to come to the defense of teammates. He's already signed an NHL contract with Carolina and that's because he has the size and skill set to develop into a 4th line winger.

5. Ryan Van Stralen - Ottawa 67's
Van Stralen is a big guy who plays big. At 6'3, 207lbs, he's one of the best power forwards in the league because he's worked hard to improve his offensive game, while continuing to be one of the league's most physical players. He makes his presence felt on the ice in a lot of ways. If he were playing for a better team, I think he'd be getting more hype, but I definitely think he has NHL potential, ala Oshawa's Scott Sabourin last year.

4. Zach Bell - London Knights
Without a doubt, Bell is one of the hardest defenders to play against in the league. It's not an uncommon site to see him throwing around an opposing forward like a rag doll in the corners or in front of the net. He's also one of the league's top shot blockers. Offensively, he doesn't have much upside at the next level, but his defensive game and intensity level make him a pro prospect.

3. Barclay Goodrow - North Bay Battalion
Apparently turned down a contract offer from Grand Rapids of the AHL this year in order to return to North Bay for his overage year. Shows a lot about his character and that's why he's the Battalion captain. Goodrow is one of the league's top two-way forwards and a monster along the wall, working the forecheck and the cycle like a pro. He also possesses a big shot, although he's never really had a top notch distributor to play with. I think he's a lock to be playing professionally somewhere next season.

2. Tyler Gaudet - Sault Ste. Marie Greyhounds
Gaudet has a terrific story. Joined the Hounds last year as a rare 19 year old rookie, then had to battle to keep his spot as an overager this preseason. But Sault Ste. Marie is certainly being rewarded for their faith in him. He's emerged as one of the top two-way centers in the OHL, using his size and skating ability to excel in a shutdown role. However, he's also shown a willingness to drive hard to the net and has been able to open up room for his linemates offensively. Has the exact tool set that you'd look for in a PK specialist, 3rd/4th line center at the NHL level, which is precisely why the Phoenix Coyotes already signed him.

1. Dane Fox - Erie Otters
No brainer. Fox is the best OA free agent to be available since Jacob Muzzin, and Muzzin has certainly done great for himself in the NHL thus far. He's still on pace to be the first 70 goal scorer in the OHL since John Tavares and Eric Lindros (obviously great company). He's the complete package as a player, possessing one of the best shots and releases in the league, but also possessing the size and intensity to excel in other facets of the game. The Vancouver Canucks won the prize by signing him and I think he'll work his way up their ladder pretty quickly.

Forwards
The top two not on the above list are definitely Sarnia's Nic Latta and Saginaw's Kris Kontos. Latta has worked hard to stay in the league, improving every year. He's finally had a breakout season and has enough offensive skill to go with tons of grit. Kontos has finally broken out offensively after a few disappointing seasons. He's got great size and has worked hard to improve his skating. Likely a tweener though. Barrie's Mitchell Theoret was an unsigned NHL draft pick who I felt at one time had NHL potential. He's had an up and down year and hasn't established any consistency with his ability to use his size. Still has talent though and if he could ever figure it out. At one point, I figured Belleville's Cameron Brace would top this list, but he continues to get himself in trouble with the league and hasn't found a real groove offensively. He's got speed and tenacity, but he's undersized for the role he'd play in the NHL. Guelph's Zack Mitchell, Sault Ste. Marie's Andrew Frtisch, and Oshawa's Dylan Smoskowitz are solid offensive players, but I'm not sure they're quite talented enough to play a top 6 role in the NHL.

Defense
Like Cameron Brace, London's Alex Basso has long been a guy on "re-entry" lists since his first year of eligibility, but he just hasn't had the best of years. He's still a terrific skater and has potential offensively, but I don't think his all around game profiles him as an NHL prospect. Oshawa's Colin Suellentrop and Saginaw's Justin Sefton are both unsigned NHL draft picks who've had decent OHL seasons. They still have size and can profile as pro defenseman. But I see Bell and Moffat as having greater potential to reach the NHL. Nelson Armstrong is a bit of a wildcard. He does a lot for Peterborough and has good size, but I'm not sure I see him in a specific role at the next level. Lastly, Craig Duininck has really emerged as a great shut down guy for Sudbury this year and probably has the greatest chance of earning a contract of all the HM's.

Goaltender
I actually seriously considered putting Ottawa's Phillipe Trudeau on this list. I think everyone in the league has been impressed with his play in Ottawa this year. He does quite well considering how much rubber he sees. He's absolutely massive and maybe an NHL team finds themselves curious to see how he can continue to develop (ala Jason Missaien).
Posted by Brock Otten at 7:59 AM

What about oshawa's Alex Lepkowski? Or is he still buffalo/Rochester property?

No longer Buffalo property. The Sabres elected not to sign him last year and he re-entered the draft. And even though he ended up going to Sabres camp and eventually signing with Rochester, the Sabres never officially held his rights this year.

His contract with Rochester was likely only for one year (most AHL contracts are that way). So by returning to the OHL, he gave that up.

He's an FA, but I didn't include him on this list because I don't see him as a serious NHL prospect. Perhaps he deserved some mention in the HM section though.