NHL rookie tournaments begin this weekend and that means NHL training camps are right around the corner. That also means OHL players have departed for their taste of NHL style action (making the remaining OHL preseason schedule a real bore fest). Nearly almost all players will return to their junior teams sometime during the course of the first few weeks of the OHL season. I'd venture to guess that number is somewhere in the 95% range. But that means there are always going to be players who don't return; players who can say their final game of the 2009/10 season was their final game in this league.

Last year, Matt Duchene, John Tavares, Ryan O'Reilly, and Michael Del Zotto stuck in the NHL. Meanwhile John Carlson, Andrei Loktionov, and Evgeni Grachev were kept in the AHL. Additionally, Alex Pietrangelo started the season in the NHL but was returned around the Christmas holidays. That's a lot of talent that didn't return to the league last year. On my list last year (here), all of these players save O'Reilly and Del Zotto received mention.

This year, I'm back with a new list, of which we can probably expect at least half of these guys to stick in the NHL. Once again, I'm not including overagers on this list because if they fail to stick in the NHL, they'll likely head to the AHL (like Nazem Kadri for example).

10. Taylor Doherty - Kingston Frontenacs/San Jose Sharks
The Sharks were incredibly pleased with Doherty's progression last year and subsequently gave him his ELC. Signed and ready to go, the behemoth Fronts defenseman will look to make a serious impact at Sharks camp. While Dan Boyle, M.E. Vlasic, Doug Murray, and Nik Wallin would have to be considered locks, the rest of the top six could be up for grabs. The Sharks do have a wealth of defensive prospects though (Demers, Joslin, Petrecki, etc), all of which ahead of Doherty on the professional experience scale. But can you say no to a 6'6 behemoth defenseman if he stands out in a similar way to how Tyler Myers stood out at Buffalo's camp last year?
Likelihood of returning to the OHL? 95%

9. Alex Burmistrov - Barrie Colts/Atlanta Thrashers
Unfortunately for the Thrashers, they don't have the luxury of sending Burmis

trov to the AHL as the Rangers and Kings did with Grachev and Loktionov last year. That's because Burmistrov was drafted out of the OHL. That means it's NHL or back to junior for the 8th overall pick. With some shrewd moves this offseason, it would appear that the Thrashers top six forwards are set, in particular the top two centerman in Nik Antropov and Rich Peverley. That begs the question, would the Thrashers feel comfortable playing Burmistrov as their third line center; a job that would appear to be wide open for the taking at camp. The other question is, is Burmistrov physically ready for the NHL? All questions that will be answered sometime in the next month.
Likelihood of returning to the OHL? 75%

8. Calvin de Haan - Oshawa Generals/New York Islanders
Calvin almost made the Islanders last season as an 18 year old, but was ultimately sent back to the OHL for another season. That season ended up being a difficult one as de Haan suffered a severe shoulder injury that required season ending surgery. Rehabilitated and ready to go, de Haan will be looking to pick up from where he left off last season. However, things are a little different on Long Island now. The Islanders brought in Mark Eaton, James Wisniewski, and Milan Jurcina this offseason and have a total of 8 defenseman with one way contracts. That means making this year's Islanders blueline is going to be a lot tougher than making last year's, especially considering he could be rusty after the surgery.
Likelihood of returning to the OHL? 70%

7. Kyle Clifford - Barrie Colts/Los Angeles Kings
Clifford was the talk of the Kings camp last year and after earning an ELC pretty quickly, some thought he might even break camp with Los Angeles. Alas, he was a late cut and spent the season with Barrie. Now it's take two for Clifford who's skating and physicality makes him an ideal candidate for the Kings 3rd or 4th line. It just so happens that the Kings could have some openings in the bottom six. Competition for those spots will be fierce, but it looks like one of his main prospect competitors might be out of the race before it begins (Brayden Schenn).
Likelihood of returning to the OHL? 50%

econd, Fronts fans if somehow Gudbranson makes the Panthers and Doherty makes the Sharks. Yikes, sorry to give you a heart attack. Anyway, the Panthers were terrible last year and that means they'll look to bring in some new blood this year. Let us not forget that Florida kept last year's first rounder Dmitri Kulikov on their blueline, and he makes up a group of four defenseman guaranteed roster spots (McCabe, Allen, Wideman). Outside of that, Gudbranson will be battling the likes of Mike Weaver, Keaton Ellerby, Nathan Paetsch, and Jason Garrison for a spot. Not exactly elite competition. If he's able to prove last year's injury and sickness maligned season provided enough development for him, he could definitely stick.
Likelihood of returning to the OHL? 40%

5. Ryan Ellis - Windsor Spitfires/Nashville Predators
What more does Ryan Ellis have to prove at the OHL level? He's won two Memorial Cups, World Junior Gold and Silver medals, and a Max Kaminsky trophy. But, due to age restrictions, Ellis is not eligible to play in the AHL (even if that might be the best place for him to develop at this point). He'll be going the Preds camp and will face off against several other solid young defenseman for a roster spot, including Cody Franson, Kevin Klein, Ryan Parent, Roman Josi, Jon Blum, and Alex Sulzer. That's a crowded blueline. However, if Ellis can prove he can withstand the position at the NHL level, while providing an injection to a Preds powerplay which finished 24th in the NHL last season, he might have a shot at staying.
Likelihood of returning to the OHL? 35%

4. Cam Fowler - Windsor Spitfires/Anaheim Ducks
Only fitting to have the two Spits side by side on this list. While Fowler may have slipped a tad in the draft, it would appear the Ducks are pretty high on him. He's already got his ELC and it looks like he has a serious shot at breaking camp with Anaheim. The Ducks really only have three veteran NHL defenseman in camp, Lubo Visnovsky, Toni Lydman, and Andy Sutton. That means, there is tons of room for a guy like Fowler to come in and see a lot of powerplay time, similarly to how the Rangers used Michael Del Zotto last year.
Likelihood of returning to the OHL? 20% 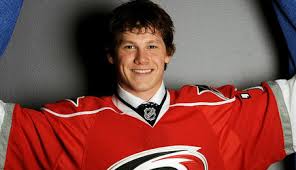 As much as the Rangers (and Rangers fans) want the Hurricanes to return Skinner to help with a Memorial Cup run, it should probably be known that the Canes could care less. After missing the playoffs three of the last four years since their Stanley Cup victory, Carolina will be looking to do anything to make the team consistently competitive. Spots inside the Hurricanes top six are wide open outside of Eric Staal, Jussi Jokinen and Tuomo Ruutu. The Hurricanes are returning only three 20 or more goal scorers from last season (Staal, Jokinen and Brandon Sutter), which means that Skinner and his 70 goals from last year (regular season & playoffs) could be of some use. While it's not likely that he's physically conditioned enough to excel in the type of role he'll play at the NHL level, you can never count out a player as determined as Skinner.
Likelihood of returning to the OHL? 15%

2. Tyler Seguin - Plymouth Whalers/Boston Bruins
At this point, it would appear the only thing keeping Seguin off the "automatic" list of players to the NHL is the Bruins cap woes. Before the NHL season, they'll need to work some magic in order to keep Seguin, which would appear to be their preference. There likely wouldn't be a lot of benefit to returning Seguin to the OHL for another season. He won the Red Tilson trophy last year and is already a committed two way player. In addition, even with Seguin, the Whalers aren't likely to be a Memorial Cup contender (as they could have possibly been last year). Of course, Seguin could always come to camp and disappoint, but I doubt that happens.
Likelihood of returning to the OHL? 5% 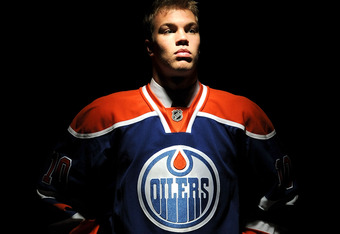 ing and the use of the number 4, it would appear the only thing keeping Hall out of the NHL this year would be a freak injury. It's time for him to move on to bigger and better things, where he'll be a part of an exciting youth movement in Edmonton.
Likelihood of returning to the OHL? 0.5%


Anybody you think I've missed? Would you alter the likelihoods or the order?
Posted by Brock Otten at 9:39 AM

Skinner will be returned before the 10th game, guaranteed.

Another year of seasoning on a championship team will have him NHL ready for the Canes next year.

Isn't Burmistrov under contract in Russia that gives him an out to play in the OHL only? I was pretty sure that was the case, therefore it may be the OHL or Russia for him.

Check out this interview from the summer with Burmistrov...

Seems like he's pretty committed to trying to make the NHL this season and states that no matter what he'll be in North American this season.

The rest would be the same. Outside of the bump to Ellis the rest is just nitpicking.

ps. was that you in Milton Friday night?

Good thing you didn't attempt to say "hi," because that would have been awkward. Wasn't me I'm afraid, although I did want to get up to that game but ended up being busy.

I think you are missing Morin. Although he probably has a better chance of making the AHL then the NHL. There is not a very good chance he is back to the OHL either way.