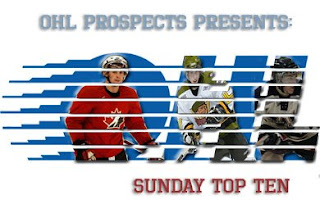 It's that time of the year for my annual (2020, 2019, 2018, 2017, 2016, 2015, 2014, 2013, 2012, 2011, 2010, 2009) list of the top second and third year eligible OHL players for the upcoming NHL Entry Draft. NHL teams continue to draft re-entry players in increasing number. This is mostly because drafting a second or third year eligible player gives NHL teams a lot of flexibility in their development under the CBA. Plus, a lot of these guys have been having success in recent years (Andrew Mangiapane, Tanner Pearson, Sean Durzi, and Colin Miller as legitimate NHL players are great examples from the OHL), which basic psychology tells us that other NHL teams will try to mimic.
Just to clarify, yet again, for those with limited understanding of the NHL draft system; North American players have either two or three years to get drafted, depending on their birth date. For those born from January 1 to September 15, they will go through three NHL drafts. For those born from September 16 to December 31, they will go through two NHL drafts. The players on this list are a mix of those having been passed over once or twice already.Also, do not confuse this list with players drafted in 2020 who will re-enter the draft should they fail to come to a contractual agreement with their NHL team by June 1 (and whose birth date still allows them to be eligible). Quite often those too are referred to as draft re-entries. But this list does not contain them because it is not yet known who those players will be.Because we haven't done this in two years, let's look at the last two seasons of re-entries. Two years ago, four re-entries from the OHL were drafted (Daws, Solovyov, Oksentyuk, and Yetman). Last year, only one (Ethan Cardwell) was. But, as you know, without the OHL playing last year, it would have been tough for players to show that their growth warranted a selection. This year, I think that number will be significantly higher. I am going to guess that we'll see 6-7 of these guys drafted. It's a very strong group led by Tucker Robertson and Lucas Edmonds, who should be top 100 selections.

Brock Otten
Brock Otten is the current director of scouting for McKeen's Hockey and has been covering the Ontario Hockey League for nearly two decades.