Sure, we've got two HUGE Game 7's in the OHL Conference Semi Finals happening on Monday, the OHL conference finals starting Wednesday, and the NHL Stanley Cup playoffs starting mid week, but hockey fans (and OHL fans in particular) should still be gearing up for the World Under 18's taking place from April 13 to April 23 in Belarus.

TSN is going to carry some of the games, which means we'll get a chance to watch Canada take on the world without having to live off latkes in Bobruisk, Belarus.

Here is TSN's television schedule for the tournament:

So why should you watch the Under 18's? I'm going to give you ten good reasons!

10. What Else is on at 8:30 a.m.?
Let's be honest, I'm not sure I even have to mention this one. Not sure how many readers I've got on here that also watch Live with Regis and Kelly, but the television schedule for 8:30 in the morning isn't very strong for the sports fanatic (unless you're watching Sports Centre with Onrait and O'Toole). Not only do the televised games provide you with quality entertainment early in the morning, but they don't interfere with your television schedule later in the day. So whether you want to watch Game 1 of the Stanley Cup playoffs, or American Idol, your habits won't be interrupted. The hockey is actually tremendous and really isn't much of a step below than the Under 20's which have reached god like status among Canadian citizens. For those of you who work (like myself), just hope you've got a DVR that can record the games for when you get home.

9. The Talent of the European Nations
It's always go 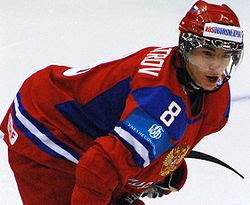 od to see what the other countries in the world have to offer, especially when it comes to the future of hockey. But for OHL fans, what these countries (Sweden and Russia especially) have to offer may actually be the future of OHL hockey. Every year, some of the top players in this tournament end up playing in the OHL the following year (or two years later). At last year's tournament, Alex Burmistrov and Robin Lehner starred for Russia and Sweden. In 2008, Andrei Loktionov and Evgeni Grachev starred for Russia, while Richard Panik was excellent for Slovakia. Which European players from this year's tournament will make the jump to the OHL next season as part of the Import Draft? It seems that more and more Russian players could end up making the jump to the CHL in order to boost their NHL draft stock and to elude the long term commitment of the KHL. But Sweden is now in talks of putting in place a new rule which could have a similar effect on young players as the KHL has. Read about it here. Essentially, Sweden wants to make junior players sign a contract with their hockey federation which ties them to Swedish junior and men's league's until the age of 22 (unless they can pay $500,000) to break it. Does this lead to more Swedish players coming to the CHL, especially if they have aspirations of making the NHL before the age of 22?

8. Greg McKegg's Chance to Shine
Playing in Erie, Saginaw, or Plymouth can be the kiss of death for a prospect wanting to be drafted in the first round of the NHL draft. In the past 8 years, only two players from these organizations have gone in the first round of the NHL draft (Ryan O'Marra in 2005 and Matt Corrente in 2006). Now, these organizations are great and I mean no disrespect to them, but in Canada they receive little to no exposure. Now I know what you're saying, TYLER SEGUIN DUDE! And yes, Seguin's exploits this year have definitely put Plymouth on the Canadian media radar. But what about Erie or Saginaw? Do the players in those cities really generate buzz in Canada? Not really. And while NHL scouts surely make the trips to these places just the same as any other OHL arena, the players often suffer from a lack of draft hype. Greg McKegg is a great player, had a tremendous season in Erie (after being a very high OHL draft pick), and yet do we ever hear his name being mentioned in the same breath as other fringe NHL first rounders from the OHL like Jeff Skinner, Tyler Toffoli, Ryan Martindale, Ryan Spooner, etc? This is McKegg's chance to shine in the spotlight. If he can have a really good tournament, he's got a chance to cement himself right with that group or possibly even ahead of them.

7. Does Erik Gudbranson Have the Mojo?
Fresh off his naming by Central Scouting as the 3rd best player from the OHL for the draft (ahead of Cam Fowler), can Gudbranson build off that momentum in the scouting community? There is no question that Gudbranson had a bit of a disappointing season for reasons beyond his control. A knee injury and then a bout with mono really prevented him from hitting a groove. Now he'll return to the Under 18's, where he played solidly for Canada last year as an underager. As a returning player (and one with leadership qualities), there's a chance he could be the captain of the team, which means all eyes will be on him. He's one of the highest rated players in the tournament and he's going to be expected to lead Canada's defensive corps. If he has a very strong tournament, does he solidify that top defenseman ranking? If he has a mediocre tournament, does that drop him? A lot riding for him.

6. A Chance to Increase Draft Stock
Nevermind a guy like Greg McKegg, or Erik Gudbranson, but the Under 18's serve as a tremendous opportunity for players to elevate their NHL draft stock. Last year, Barrie's Kyle Clifford used this tournament to spring board himself into early second round range (after being ranked 182nd by CSS). It also helped Calvin de Haan move up into the first half of the first round. Who on Team Canada really impresses the scouts this year? There are 13 OHL guys on this team, some of which have flown under the radar this year. Is it Owen Sound's Geoffrey Schemitsch, whose solid rookie season has finally started to generate hype? Is it Sarnia's Nathan Chiarlitti who was trapped on a struggling Sarnia team this year and not even ranked by Central Scouting? Or is the chance for someone like Steven Shipley or Ryan Spooner to prove that they belong in the first round?

5. What Else Does Canada Have to Offer?
I've spent all this time talking about what the OHL has to offer, but the tournament

serves as a venue to check out the other top young talent Canada has to offer. Prince George's (WHL) Brett Connolly has been injured for most of the season, but he's a potential power forward who could go in the top 10, possibly even top 5 (with a solid tournament). Seattle's (WHL) Calvin Pickard (brother of Nashville first rounder Chet) is quite possibly the best goaltender available from the CHL for this year's draft. While Everett (WHL) defenseman Ryan Murray isn't even eligible for the NHL Draft until 2012 (thanks to a late birthday like Ottawa's Cody Ceci), and he's turned heads in the WHL this season. Some are calling the best and most impressive 16 year old defenseman the WHL has ever seen. This tournament serves to provide you with a look at what the rest of the country has to offer in this age group.

4. Potential of an all OHL blueline
Fresh off the hyping of Ryan Murray in reason number five, I'm going to throw a different scenario at you for reason four. With 6 of the 7 Canadian defenseman coming from the Ontario Hockey League, there is a chance that Canada could be primarily icing an all Ontario blueline. That's to say if Team Canada chooses to ease Murray into a significant role, seeing as he's such a young player for this tournament. 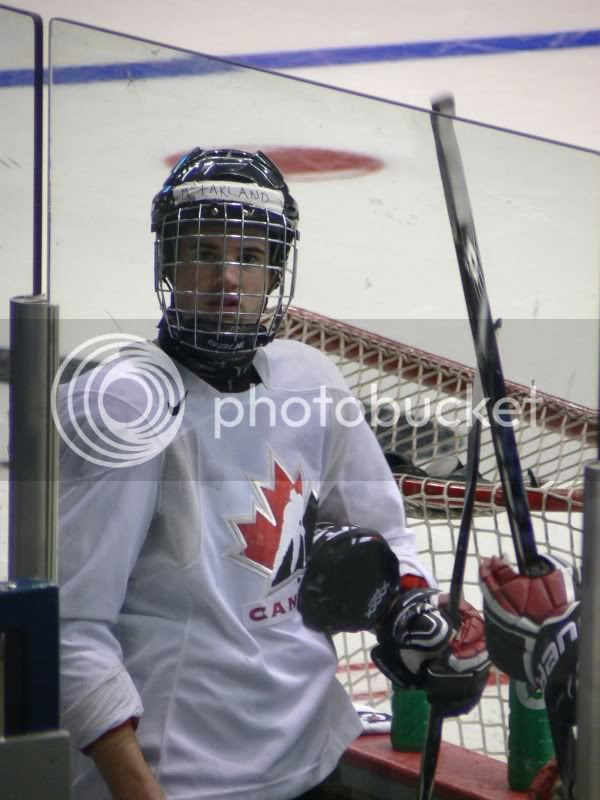 long, it's been a John McFarland free fall watch in the NHL draft rankings. He's gone from a potential top 5 pick to being ranked at the bottom of the first round now by most scouting services. With his play in the OHL this season, quite frankly I'm surprised he hasn't fallen further down. The one thing that saves him (outside of his NHL size, speed and shot) is his performance whenever he puts on the Canadian jersey. Last year at the Under 17's he lead Team Ontario to the gold by scoring 9 goals and 13 points in 6 games. Then at the Under 18's he had 3 goals and 8 points in 6 games as a underager. Then this summer he captained Team Canada to gold at the Under 18 Ivan Hlinka tournament, scoring 5 goals and 7 points in 4 games. In his last three international tournaments, McFarland has 17 goals and 28 points in 16 games. This Under 18's doesn't look much different as he scored a hat trick in Canada's 5-4 exhibition loss to Finland this week. With another good showing internationally, McFarland can likely impress enough people to get himself back in contention for a spot in the first half of the NHL first round.

2. The Talent of the United States
The defending Champions have medalled in this tournament for six straight years, including a trip to the finals in 4 of the last 5 years (3 golds in that time). There is no question in my mind that they are the favourites to win Under 18 gold again this year, especially considering the team has played together all season long against top competition in the USHL. However while you're marveling at the talent the United States now boasts, don't forget to check out a few players in particular. Starting netminder and 2009 goaltender of this tournament, Jack Campbell has already committed to Windsor for next season. Star winger Brandon Saad is likely heading to Saginaw too. Outside of those two, there are 13 players with OHL draft ties; Chase Balisy (London), Kevin Clare (Erie), Adam Clendening (London), Tyler Biggs (Oshawa), Austin Czarnik (Windsor), John Gibson (Kitchener), Kevin Gravel (Plymouth), Andy Iles (Sault Ste. Marie), Stephan Johns (Windsor), Jon Merrill (Plymouth), Mike Mersch (Erie), Bryan Rust (Mississauga), Jarred Tinordi (London). While you shouldn't expect the majority of these guys in OHL uniforms anytime soon, history tells that that at least a couple of them are likely to be in the OHL next year. Also, don't forget Peterborough's Austin Watson was added to this team too.

1. Canada as the Under Dog
It's not very often that we can call ourselves the under dogs in hockey, but there is no doubt that we aren't favoured to win this tournament. In a way that makes it exciting, perhaps more so than other tournaments. Expectations aren't set incredibly high and these guys can just go play some hockey and do the best they can for their country. We as the audience need to support them and give them a reason to dig deep and bring home that gold medal that has eluded us for the majority of this tournament's short history. So let's hear it folks. Go Canada Go!

In case you missed it here is Canada's roster for this tournament as well as some general information about what the IIHF Under 18's are all about.

Anything you think I've missed? Are you going to watch the Under 18's now?
Posted by Brock Otten at 10:30 AM

I am really happy that the U.S. has developed into a hockey country on par with Canada in international competitions like this. I love the game and it makes me happy that others are experiencing a growing love for the game too.