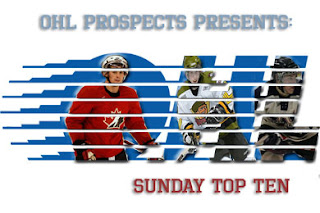 This is the first Sunday Top 10 of the regular season, after my top 10 preseason performers list from September. I figured it would only be fitting to highlight some of the players I've felt have taken massive steps forward this year. We're nearly a third of the way into the season, so I think it's fair to begin to evaluate (and commend) specific performances.

I give you my top 10 most improved players for 2012-2013. The key is "most," since many of the players in this league improve from year to year.

10. Darnell Nurse - Sault Ste. Marie Greyhounds
Truthfully, it seems like it's mostly a confidence boost. I'm seeing a totally different player out on the ice this year. And that's to be expected, considering Nurse is a talented sophomore. If he wasn't receiving consideration for this list, some red flags would likely need to be thrown. Offensively, he's so much more involved. He not only leads the rush and quarterback's the powerplay, but he's also aggressive in jumping up in the attack looking for scoring opportunities. Defensively, he's still a bit raw, but his confidence in using his size has skyrocketed. He's become a physical force and is tossing aside players with conviction. I'm sure added strength this offseason also plays a part in these improvements too. The key will be maintaining this level of play once he's bumped down the depth chart following the return of Ryan Sproul.

9. Mitchell Theoret - Niagara IceDogs
Last year was a bit of a disaster for Theoret. As a draft eligible forward he was effective in a limited role, providing energy, physicality, and puck possession support. But following his selection by the Isles in 2011, things went down hill. He was given more offensive responsibility last year and it sucked the life from his game. Quite frankly, he looked moderately lost. This year, he's returned to keeping things simple and playing to his strengths, all the while adding a new sense of confidence offensively. He's currently playing as part of the hottest line in the OHL (with Strome and Brett Ritchie). Some people might see him leeching off that duo, but he's an equally integral part of the trio. His size and physicality opens up lanes for Strome and Ritchie. His board work helps to tire down defenses. And he's getting himself into great positions to score. A great resurgence for Theo.

8. Brady Vail - Windsor Spitfires
On a team full of terrific offensive players, it's the Spits best two way player who has taken his offensive game to the next level. Vail has a new found confidence in the offensive end, and has become a very effective player off the rush (thanks to what appears to be some strong skating and strength work this offseason). The Spits haven't had a great season, and some of the team's best players have been wildly inconsistent, but one of the main reasons the club still sits at .500 is the emergence of Vail as (arguably) the team's top offensive weapon.

7. Jason Dickinson - Guelph Storm
I've really liked what I've seen of Dickinson this year. I think he's emerging as a potential top 15-20 pick for 2013. One of the main reasons the Storm have been one of the top teams in the league this year has been the improvements and maturity displayed by their younger players. Dickinson has become a consistently dangerous offensive player who's speed, puck handling ability, vision, and tenacity make him a player to watch. Truthfully, I could have probably made a list of just Storm players for this (as you can tell by the honorable mentions)!

6. Jordan Binnington - Owen Sound Attack
Binnington has always had the talent to succeed in this league, but it's been his level of consistency from month to month that has always prevented him from reaching that upper echelon. This year's start would suggest that he's focused and determined to challenge for the league's top netminder nod. Last night's win against the Greyhounds was actually the first time this season that Binnington had allowed more than 3 goals in a game. He's been a rock and has thrown his hat into the ring for a chance at representing Canada at the WJC's.

5. Brett Ritchie - Niagara IceDogs
Similar to Binnington above him, Ritchie has long been the guy who had all the talent but who just wasn't able to string together consistent performances. I thought that he played well after the trade to Niagara last year, but the offensive production wasn't always representative of that. This year, he's flat out dominating alongside Ryan Strome and Mitchell Theoret. There are three things I've noticed about his game that seem to explain the elevation of his production. One, he just looks hungrier out there. He's skating hard, hitting harder and has been way more aggressive with the puck on his stick. Two, he looks stronger and in better shape. He's able to sustain pressure in the offensive end longer, and he's finishing games just as well as he's starting them. Three, his skating looks to have added an extra gear, which is helping him to get better separation off the rush and on drives to the net.

4. Anthony Camara - Barrie Colts
He's already only two goals away from tying his career high (16). He's a no-brainer for this list. From what I've seen, nearly every aspect of Camara's game has taken a step forward. He's become one of the league's top net presences because of his persistence, strength, and hands in close. I think one of the biggest reasons he's putting up more points is because he's improved his ability to carry the puck. I've felt like this was an area that always held him back from being more involved, but this year he looks way more sure handed and confident. When you factor in all the things he does to involve himself away from the puck, it helps to explain why the Bruins are quite excited about this player.

3. Spencer Martin - Mississauga Steelheads
Quite the transformation for Martin in his second year in the league. He went from a fresh faced rookie who (at times) looked a little over his head, too one of the league's top netminders as a sophomore. I've been incredibly impressed by his poise and confidence in the crease this season. The Steelheads have the third best winning percentage in the entire OHL and he's been the main reason. Martin challenges shooters, soaks up rebounds and follows the play with the aptitude of a 5 year veteran. I can't say enough good things about him and the things he's done this year for Mississauga.

2. Tyler Graovac - Ottawa 67's
While I'm still not quite sure what to make of his NHL potential, you've got to give it up to the improvements he's shown this season. He's gone from a guy unlikely to get an NHL contract to the league's leading goal scorer. He's still not the most physical player, but he's learned to use his size to be more effective in the slot and in protecting the puck to get shots off. He's also playing less of a perimeter game and has added strength to make him a more effective player along the wall. And for those saying he's mooching off of Sean Monahan, the two only play together on the powerplay (where only 5 of his 18 goals have come from).

1. Boone Jenner - Oshawa Generals
It might surprise some people to see Jenner this high on the list. It's not as if Jenner was chopped liver last year when he was one of the league's premier two way players and a valuable member of the World Junior team. But I've been blown away by his ability to find yet another level to his game this year. The case could be made to suggest that Jenner is the best player in the OHL right now (over the likes of Scheifele, Strome, Hamilton, etc). He's been an unstoppable force. His skating looks significantly more explosive and he's become maybe the most aggressive player in the league with the puck on his stick. He's also really improved his ability to create offense off the rush and his shot looks way better, especially his release. He's still doing all the things he did well before, it's just that now he's doing them better than anyone else. When (or if) the NHL starts up, I'd actually be surprised if he's not in Columbus.

Cody Payne - Plymouth Whalers
He's still playing that rigorous, in your face style, but he's learned how to channel his tenacity to help him at the offensive end. He's become a quality offensive threat, especially in close to the net where he's become quite a competent crease crasher. But he's also improved his ability to handle the puck which has involved him in more aspects of the offensive scheme.

Justin Auger - Guelph Storm
He's a behemoth and one I thought a team might take a chance on last year at the draft. But he's come back strong this year and looks like a different player. His skating has improved massively, to the point where he can now be an effective player off the rush. He's also gotten stronger and is using his size more to win battles along the boards and work the cycle. Auger is really learning how to play a pro style game and I think he'll be rewarded come June 2013.

Chris Festarini - Niagara IceDogs
Most of the improvement came last year post trade to Niagara, where he started to show why he was such a highly touted OHL draft prospect once upon a time ago. This year he's embraced the starting role in Niagara and is playing with a lot of confidence. He's been quietly very solid for the Dogs. The big difference I've noticed is his ability to control rebounds has greatly improved over the last year or so.

Zac Leslie - Guelph Storm
Another Guelph player. And another Guelph player who was (perhaps surprisingly) passed over at last year's draft. Leslie has been a much more confident player at both ends of the ice this year. He's taken his offensive game to the next level and is involving himself in the attack with greater frequency. Defensively, he's playing with more of a consistent edge.

Scott Sabourin - Oshawa Generals
The overager worked hard to earn a spot (beating out Emerson Clark) and is already only one goal away from tying his career high (10). He's being rewarded with powerplay time where he's embracing his role as a crease crasher and disturber.

Mike Moffat of the Frontenacs, and Connor Brown of the Otters should be mentioned, as well.

Agree about Moffat. He's someone who should have been an Honorable Mention. He's become the Fronts leader on the back end and has that defense looking way more focused than last year. I've always been a fan of his dating back to his rookie season in London. Glad to see him doing well.

As for Brown, I'll have to disagree. Statistically, he's improved. But he's still the same player as last year. That's not necessarily a bad thing, but his skating and overall game are still lacking. He remains a player who bases his game around getting his shot off (similar to the way Tyler Toffoli played to start his OHL career).