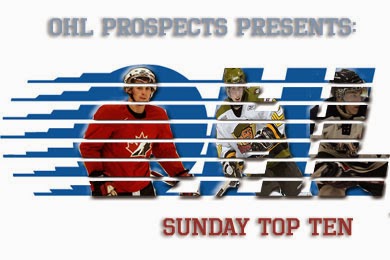 One of the many annual traditions I have on this blog is to rank the new batch of OHL rookies in order of the impression they left on me. Only the "true" OHL rookies have been included, thus why it's labeled the "Most Impressive 1997 born players." However, with the whole exceptional status thing, this means that Connor McDavid will be included on this list (just as Aaron Ekblad was last year). I think it's important to compare these guys to what their age appropriate peers are accomplishing in the league.

I always like to note is that this isn't an early ranking for the 2015 NHL Entry Draft. This ranking isn't the order in which I believe these players should be ranked for the draft, but an order of which players impressed me most. It's not a draft prognostication, it's an acknowledgment of the significant impact these players have had on their teams this season.

10. Justin Lemcke - Belleville Bulls
There weren't a lot of bright spots on the Bulls this season (despite their late push towards the playoffs). Many of the team's younger players just didn't take the necessary steps forward to make them consistently competitive. However one player did stand out and that was their first round pick, Lemcke. He earned a lot of ice time from George Burnett and was arguably one of the team's most consistent defenders. He seems like a good fit for the big ice in Belleville as his skating ability was noticeable. However, he also defended well and seems to be a heady two-way player with some potential to develop even more of a mean streak along the wall and in front of the net.

9. Graham Knott - Niagara IceDogs
I loved what I saw from Knott this year as a potential power forward prospect. Not too often you see 16 year olds come into the league and be a big factor physically like Knott was. I really like the energy he brings without the puck as he's constantly buzzing on the forecheck and on the backcheck. He's already someone who's relied upon to kill penalties for Marty Williamson. Offensively, he seems to have good instincts and could develop into a quality goal scorer in close with some added strength.

8. Mitchell Vande Sompel - Oshawa Generals
Tired massively in the second half, but still had a very impressive season for a 16 year old defender. Vande Sompel did a great job jumping right into a powerplay role and has a lot of offensive potential in the OHL. And while he's not the biggest or strongest, I felt like he more than held his own in the defensive end, a reason why D.J. Smith was able to rely on him as much as he did. He certainly has the compete level and desire to succeed despite his lack of size (5'10) on the backend.

7. Lawson Crouse - Kingston Frontenacs
Had a similar impact in Kingston as Knott did in Niagara. Crouse is a budding power forward prospect. In fact, he might be one of the more physical 16 year old forwards I've seen in the league in recent years. He certainly was not intimidated this year. I particularly liked his physicality in the offensive end, as he put pressure on defenses and really cleared room for his linemates. His shot was also noticeable as he has some definite goal scoring potential moving forward. He's the perfect compliment to this Kingston team moving forward, as he can clear space for some of the smaller, skilled forwards on the team.

6. Nikita Korostelev - Sarnia Sting
While it was often difficult to stand out on a very poor Sarnia team, Korostelev did that more times than not. He's definitely got a high skill level with the puck and is great at extending plays in the offensive end. He's also got a great shot and release which will help him score his share of goals in the league. But perhaps what impressed me most was his tenacity. While this seems to be a still developing part of his game (was inconsistent), at times he was quite physically engaged and didn't back down from mixing it up in the corners or fighting hard in front of the net. If he can harness that aspect of his game, it could separate him from a lot of other highly skilled players in next year's draft.

5. Dylan Strome - Erie Otters
Dylan seems to be a very similar (although larger) player to his brother Ryan. His playmaking ability and ability to see the ice is definitely his most valuable at this point. Like Ryan, he has terrific puck skill and is able to read plays exceptionally well in the offensive end. He'll have to continue to develop his shot though, as this was a big part of Ryan's game too. And like Ryan, Dylan seems to have some skating issues, but Ryan improved that aspect of his game a lot over his OHL career. All in all, Dylan was a very impressive rookie who showed that he's likely to be one of the top centers in the league by the time he graduates.

4. Blake Speers - Sault Ste. Marie Greyhounds
Man, are the Greyhounds drafting well lately. Speers was exceptional as a rookie this year. He's not the biggest guy, but he's always there in front of the net looking for scoring opportunities. Speers is one of those guys that the puck just seems to find near the crease, likely because of his terrific hockey sense. And when he gets it, he's got a great shot and is able to bury the majority of his chances. I also liked the high level of energy he brought in the offensive end, constantly buzzing around and getting his nose dirty. He'll need to continue to add strength because he's not the biggest guy, but he's certainly a very talented offensive player.

3. Mitchell Marner - London Knights
How could you not be impressed by Marner this year? No matter where he slotted in the line-up, whether he got 15 minutes or 5 minutes of ice time, Marner was always involved and noticeable. His speed and tenacity without the puck definitely endears him to the Hunter's and the type of game they like to play. The thing is, when he's able to get the puck and out hustle opponents, he has such terrific vision and is a fantastic playmaker. Anyone who played with Marner this year benefited from his ability to create offensive scoring chances out of very little. It'll be interesting to see where scouts slot him for the draft next year, considering his lack of size (although he did go through a massive growth spurt this year which should see him get close to 6'0 by draft time next year).

2. Travis Konecny - Ottawa 67's
The real deal. Konecny did not disappoint as the first overall pick this year. There are so many things about his game that are extremely noticeable for all the right reasons. Firstly, he's an absolutely dynamic skater who is able to explode up ice and across the blueline. Secondly, even when he's at top speed, he handles the puck incredibly well. Thirdly, his shot, in particular his release, his fantastic. Lastly, his compete level is incredibly high. When he doesn't have the puck, he's still one of the hardest working players on the ice trying to get it. Regardless of whether the 67's were up 4-3 or losing 10-1, his play and intensity never wavered. He deserves a lot of credit for that.

1. Connor McDavid - Erie Otters
What more is there to say about McDavid that hasn't already been said? He's the face of the league already, and rightfully so. Three things make him the most dangerous player on the ice. His speed, his stickhandling, and his ability to do both at the same time. When you throw in how well he thinks the game, it creates the complete offensive package. I really want to see him put the Otters on his back during this playoff drive and at least make the Western Conference finals.

Brett McKenzie - North Bay Battalion
The perfect Stan Butler player. McKenzie is a good sized pivot that already understands how to play at both ends of the ice. He's got a great shot and will score his share of goals in the league, but will need to continue to work hard to upgrade his skating and positioning in order to get himself more scoring chances.

Matt Spencer - Peterborough Petes
I had really high expectations for Spencer this year after watching him in the OHL Cup last year, but I think it's safe to say that he didn't quite meet them. That said, he was significantly better in the second half of the season and has a ton of potential. I thought that he had become a very sturdy player in his own end by the end of the season, using his skating ability and size to keep players in front of him. And he has an understated physical element to his game that I expect to really grow moving forward. I did expect more offensively though.

Adam Craievich - Guelph Storm
Doesn't play a whole lot, but he's very noticeable when he does. Accepted his role with Guelph and worked hard as an energy player, but you can tell that he's got the potential to be way more than that. His hands are top notch and he's developed well as a cycle player. He's also got a great shot which he doesn't need a lot of room to use. With added ice time next year, he could really explode if paired with a guy like Fabbri or Dickinson.
Posted by Brock Otten at 10:32 AM