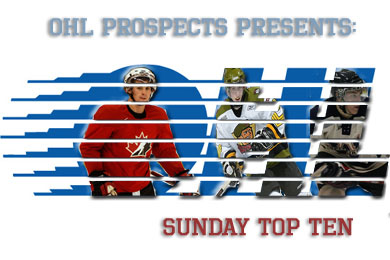 With the news that Sonny Milano IS actually coming to Plymouth after all, there's probably no better timing for this annual article. This has certainly become a tradition of the blog (thus this being the sixth edition). In these entries, I look at some of the players leaving other substantial leagues (USHL, NCAA, QMJHL, etc) to come to the OHL. Usually it just so happens to be American players. Import selections are not included in this article.

This year, all of the players in the top 10 have already confirmed to be coming to the OHL. There are some players listed in the HM section who have not. They currently have other commitments but have long been rumoured to be coming to the OHL. History would suggest (if you look at previous editions of this article) that one or two of these guys usually end up showing up at some point.

10. Jarrett Meyer - Defense - Owen Sound Attack
An absolute behemoth of a defender (6'8) who will be transferring from the EHL (Eastern Hockey League). Former London Knights John Carlson and Jarred Tinordi are alumni of the league. That said, they put up significantly better stats, so don't go expecting that caliber of player. The Attack already have a pretty deep and young blueline, so it will be interesting to see where Meyer slots in and how much playing time he actually gets. But I'm sure Owen Sound is hoping he can add a physical edge to a defense that currently lacks that component (at least consistently).

9. Chris Martenet - Defense - London Knights
The Knights are bringing in some new faces next year to their defense, thanks to the graduation of several key players. And Martenet is one of them. He played last year for the USHL champion Indiana Ice, but saw little playing time in the playoffs. Like Meyer (10th on this list), he's a real big kid (6'6) who I'm sure the Knights are hoping can add some size to a relatively small defense. He's going to get his chance to show he can play as the defensive spots behind Bergman and Mermis (and Zadorov if he's around) all are up for grabs.

8. Brandon Shea - Forward - Windsor Spitfires
Shea is a big roll of the dice by the Spitfires. He's coming from the QMJHL after stops in Moncton and Quebec. He's a former first round pick in the Q and was once a highly touted player. He has the size and skill to play a power forward game, but hasn't been able to put together consistent performances. As a '95, this is probably his last chance to prove what he's capable of. Hopefully he comes into camp with a fire lit under his butt and has a positive impact on Windsor's season. Secondary scoring will be key to their success.

7. Chad Duchesne - Defense - Kingston Frontenacs
The local boy is coming home. After playing two years for Kingston of the OJHL, Duchesne joined Sioux Falls of the USHL last year, where he led them in defensive scoring. He was set to attend Northeastern University, but backed out of his commitment to join Kingston instead (following a trade from Mississauga). Kingston has some serious holes to fill on their defense, so Duchesne is likely to jump right into their top 4 and help run the secondary powerplay unit. He can potentially impact the game at both ends of the ice and plays bigger than his 5'11 frame would lead you to believe.

6. Roy Radke - Forward - Barrie Colts
Radke appears to be a very good signing for the Colts. The 6'2 power winger played at Shattuck St. Mary's last season and based on what I'm hearing from scouts in that region, he's a player on the rise who got a lot better as the season went on. He's a late '96 which makes him eligible for this year's NHL draft. He likely signed on with Barrie in hopes that he can raise his draft stock. Barrie does have some openings up front and if he plays well, he has a shot to get into the top 6 and earn some powerplay time.

5. Jeremy Brodeur - Goaltender - Oshawa Generals
A teammate of Radke's, Brodeur also comes to the OHL after playing with Shattuck St. Mary's. However, more famously, he's the son of Devils' legend Martin Brodeur. He's also a late '96 who'll come to the OHL hoping to get attention from NHL scouts in his initial draft year. In Oshawa, he does have a good shot of earning significant playing time. While Ken Appleby has to be considered the favourite to earn the starter's job, he's not yet a proven talent in the league as a starter.

4. Gabe Guertler - Forward - Sault Ste. Marie Greyhounds
Guertler has a chance to be a real impact player for the Greyhounds after defecting from the University of Minnesota this offseason. He has previously been a high scorer at the USHL level before a disappointing freshman season at Minnesota. He likely jumps right into a top 6 role with significant powerplay time. As an undersized player, he does bring some tenacity to his game too, a quality that will help him fight right into the Hounds lineup.

3. Ryan Mantha - Defense - Niagara IceDogs
The signing of Mantha was finally announced this week after it had long been rumoured that he was going to Niagara this season. A 4th round pick of the New York Rangers in 2014, Mantha has the size and skill to impact the game at both ends of the ice. At 6'4, 225lbs, he's a big kid, but there are concerns over the consistency with which he plays with an edge. But he moves the puck well and should be able to help QB the Dogs' powerplay. How much ice time he'll get 5 on 5 remains to be seen. Niagara is returning both of their top two pairings (Mercer/Haydon & Siebenaler/Dunn), so I wonder if they'll want to break those up or not.

2. Luke Kirwan - Forward - Windsor Spitfires
By far, one of the top coups of this offseason by any OHL team. The Kirwan signing was absolutely massive for Windsor. The talented power winger was one of the top players on the U.S. Under 17 team and is considered a potential top 10 pick in 2016 (NHL). He's going to be a very good OHL player. This gives a guy like Josh Ho-Sang another extremely talented player to run with and that will make Windsor an exciting team to watch next year...and moving forward.

The million dollar question has finally been answered. The last few months seems to have been a war on twitter and the media, with some experts stating Milano was coming to Plymouth regardless of his commitment to BC, while others believed what Milano was saying and refuted all rumours. That's all in the past now after Milano announced his intention to sign with Columbus and play for Plymouth. The Blue Jackets first rounder is obviously a big add for Plymouth (duh). Along with the addition of Campagna, this could bump the Whalers from potential middle of the pack team in the West to potential front runners. It remains to be seen whether Milano will play down the middle or the wing as a Whaler (he can play both), but either way he's a high octane offensive player who will elevate the play of those around him.

Michael Prapavessis - Defense - London Knights
It's not too often you see a player spurn the London Knights, but Prapavessis has done that after they acquired his rights. When London does that, that's usually code for "done deal." But, he seems strict on his commitment to RPI, where he'll play next year. The Dallas 4th rounder would be a MASSIVE addition to a London blueline that badly needs help. He's an incredibly talented offensive defender and would be an impact player in the league.

J.J. Piccinich - Forward - London Knights
A Maple Leafs 4th rounder, Piccinich is slated to be headed to Boston University next year after a great year in the USHL. The talented, yet slightly undersized playmaker would be a great fit in London where he could help get the puck to guys like Horvat and McCarron.

Zach Werenski - Defense - London Knights
The last of London's HM's on this list, Werenski is a real interesting situation. A '97, he's fast tracked his studies so that he can attend the University of Michigan next year, his NHL draft year. Not too often you see players jump right from the Under 17 portion of the USDP to the NCAA. A high pick of London, Werenski has long be courted by the Knights because he'd instantly become one of the better defenders in the league. He's a potential first rounder in 2015 and he seems very set on staying at home to play in Michigan.

Jordan and James Greenway - Plymouth Whalers
The Greenway brothers are both Plymouth draft picks, with Jordan being the former first rounder. If the Whalers' can't get him to come, it'll be a pretty big loss for them. Jordan will be playing with the U.S. Under 18 team this year (after playing U17 last year). Meanwhile James will be playing with the U17 program. Jordan recently announced a commitment to Boston University, but who knows how concrete that is. He'll be eligible for the NHL draft this coming year and has a great shot of being a 1st round pick. If that's the case, the team that drafts him could definitely steer him towards Plymouth, in which case you'd have to assume James follows suit. But, there's also a pretty strong chance neither wears the Whaler green.
Posted by Brock Otten at 9:15 AM