Last year, as the NHL Entry Draft drew near, I used the two Sundays before the draft to profile the year's biggest fallers and risers from the OHL. It was well received, so I figured why not do it again. Today's Top 10 examines the ten unfortunate draft fallers, while next Sunday's Top 10 will examine the biggest risers.

The guys on today's list are an interesting mix. Some were heralded as first rounders only to lose ground (but are still fairly highly regarded). Others were expected to be drafted and now look like long shots. Obviously some in the middle too.

10. Nathan Chiarlitti - Sarnia Sting/Jeff Braithwaite - Peterborough Petes
Both of these guys were contributing members of the 2009 gold medal winning Team Ontario at the Under 17's and had solid rookie seasons in the OHL last year. As such, there was some expectation that they would have good seasons this year...at least good enough to put them on the NHL draft radar. But it hasn't really worked out that way. Braithwaite didn't make any progress offensively, and Chiarlitti was stuck on a bad team. The main problem probably lies with the fact that both are only averaged sized and don't do anything that really screams "potential" at the NHL level. Ultimately, it looks like neither will be drafted at the end of June.

9. Joe Rogalski - Sarnia Sting
Another member of the Sting defense unit who struggled thanks to a lack of team success, Rogalski has really fallen off the charts. As a late 1991 in his third OHL season, a lot more was expected of Rogalski who still hasn't been able to harness his raw talent. He's got size and potential from the back end, which means he could still be a late round pick (or even higher) in 2010. But, it's pretty unlikely that he goes as high as people were projecting him to go last season...when we were hearing things like second or third round based on the size and potential he held.

8. R.J. Mahalak - Plymouth Whalers
Mahalak is another late 1991 who really hurt his draft stock in his third OHL season. If he was a little older and was eligible last year, he probably goes in the mid rounds after a pretty solid second OHL season. But this year was a disaster for him. The concussion late last year thanks to a Jordan Nolan hit, and shoulder surgery this year limited Mahalak to only 27 games this year. With all the injury woes he's had (even if you want to call it bad luck), I doubt anyone takes a chance on him at this point. If he comes back strong next year, he sets himself up to be drafted in his final year of eligibility.

7. J.P. Anderson - Mississauga St. Michael's Majors
After the magical OHL playoffs and rookie season Anderson had last year, many (including myself) were expecting HUGE things from him this year. Undersized, but incredibly athletic, Anderson could have really distanced himself from the other goaltenders available with a solid year. Instead, he faltered and was never really able to consistently put things together. His numbers aren't terrible, and even if he was the platoon starter on one of the best teams in the league, Anderson just didn't take the bull by the horns. He just didn't progress or improve this year to the point of emerging as one of the league's best starting goaltenders. At this point, he may not even get drafted...which is a bit of a shame because the potential is there (even if he's undersized for the position by NHL standards).

6. Adam Sedlak - Peterborough Petes
Another late 1991 player who suffered from the extra year of scrutiny and failed to take that next step forward. As a rookie and import last year, Sedlak was drawing a lot of rave reviews for his raw offensive potential and size from the back end. But he didn't have strong year for the Petes and drew a lot of criticism for his lack of improvement. There are concerns over his hockey sense, which is often a red flag for defense prospects. While he could still hear his name called in 2010, it's not likely to be anywhere near as high as we were hearing last season when Sedlak was a promising European rookie.

like a broken record, but we've got another late 1991 born player (and not the last on this list) who just didn't progress as many hoped he would in his third OHL season and first full season with Erie. Yogan still projects as a top 100 selection at the draft, but for a guy with his size and skill package you have to wonder why he's not rated higher. There are concerns about the way he sees the ice and the way he uses his teammates. I've read concerns over a perceived lack of effort. Anyway you want to slice it, Yogan failed to have the type of impact you would have liked to see from him this season. As a result, maybe someone get's a steal in the mid rounds.

4. Gregg Sutch - Mississauga St. Michael's Majors
After coming over in an offseason trade from Sarnia, Sutch had very high expectations placed on him going into this season. The Majors gave up a lot to get him (Kerbashian, Neuber, and a 2nd, 3rd, and 4th), but definitely didn't get the type of production they wanted this year. A lot of that had to do with some injury problems. Sutch sprained his ankle, then got a staph infection just as he was returning to action. After returning, Sutch was hit by Brock Beukeboom and sustained a separated shoulder. But as a testament to his character, Sutch battled through the injuries and at least managed to make it back in time to have an impact in the OHL playoffs. That being said, all of the injuries prevented Sutch from developing any kind of consistency offensively and this once potential high NHL draft selection, is now looking more like a mid-late round pick.

3. Bryce O'Hagan - Sault Ste. Marie Greyhounds
A member of the Canadian Under 18 team last year, and an "A" prospect on Central Scouting's preseason Players to Watch list, O'Hagan had really high expectations this year. At the start, things were looking really promising. He had an outstanding preseason and a great start to the year. But then it all fell apart. Robin Lehner took over starting duties for the Hounds and O'Hagan took a back seat in what was supposed to be his breakout season...in his third OHL campaign. As such, O'Hagan has gone from an "A" list prospect (with the likes of Seguin, Hall, etc) in the eyes of the CSS to being ranked 23rd among North American netminders and at this point a long shot to be anything more than a late round pick.

2. Joey Hishon - Owen Sound Attack
After a great second season in the OHL and a tremendous performance for Canada at the Under 18's, Joey Hishon was looking like an NHL first round pick for 2010. A lot of offensive talent in a small package. But this year did not go well (call it the late 1991 curse this year). The Attack struggled, Hishon was often accused of not using his teammates well (likely out of frustration from the lack of success) and then he broke his foot blocking a shot and missed a good third of the season. There is a lot to like about Hishon, but there's no question he's not sitting as pretty in the rankings as he would have had he been eligible last year. The general consensus seems to have him sitting in the 2nd-3rd round range.

1. John McFarland - Sudbury Wolves
Is there any surprise her 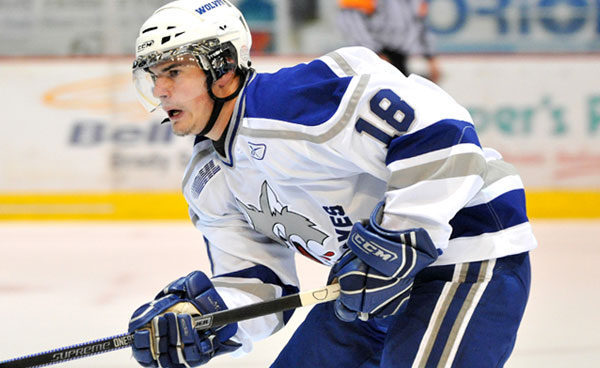 e really? McFarland was being talked about as a potential top 5 selection for 2010 at this point last year on the strength of some seriously awesome performances for Canada internationally. But this year was a disaster. Things in Sudbury went from bad to worse. And then there was the disappointing performance for Canada at this year's Under 18's...a tournament McFarland lit up last year and an underager. He's gone from a consensus lottery selection to someone who could fall out of the first round entirely. But then again, maybe his package of size, speed and skill will be too much for an NHL team to pass up despite the concerns raised this season.

I'm really hoping Yogan gets drafted by a decent team. I've seen him play several times and his name is ALWAYS mentioned, either goal, or primary/secondary assist man.

Brock Otten
Brock Otten is the current director of scouting for McKeen's Hockey and has been covering the Ontario Hockey League for nearly two decades.